One-dimensional nanowires from semiconductors like InP, GaP, and Si are promising nanomaterials for next-generation inorganic solar cell devices. Understanding their optical response is extremely important for achieving increased performance in solar energy collection. Researchers at the FOM Institute for Atomic and Molecular Physics (AMOLF) and Philips Research in the Netherlands have investigated strong light scattering in layers of nanowires. Examples of nanowire layers are shown in Figure 1. Using a specially developed broadband optical technique, they show that trapping of light by multiple scattering is important in the design of nanowire devices (Figure 2).

We have demonstrated that nanowires actually can be grown to form one of the most strongly scattering materials available today. Next to its technological relevance, this property opens exciting new prospects in fundamental research on random lasers and Anderson localization of light. By matching the nanowire diameter to the optical wavelength, light can be trapped for several periods inside the nanowire, leading to a resonant enhancement of their scattering efficiency. The high tunability of nanowire properties and alignment, and the general applicability to groups III-V, II-VI, and IV semiconductors, enable new possibilities for harvesting of the solar spectrum. The results of this research are published in the prestigious journal Nano Letters.

Figure 2 Using a new technique of broadband enhanced backscattering, the transport mean free path of light in the nanowire medium was determined over a wide spectral range in the visible and infrared. The result, presented in the right panel, shows a strong variation of the 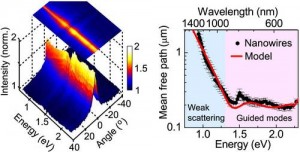 mean free path from the weak to strong scattering regimes with characteristic oscillations corresponding to the guided modes of the wires.

Researchers from the FOM Institute for Atomic and Molecular Physics (AMOLF), located at the High Tech Campus in Eindhoven, and Philips Research developed a method to drastically reduce the reflection of light at the interface between a high refractive index semiconductor and air. The researchers were inspired by the eyes of moths that are covered by tapered nanostructures. Thanks to these nanostructures, night moths are capable of seeing very well in the dark. The results of the research have recently been published in the prestigious journal Advanced Materials.

Light travels as a straight beam in homogeneous media. The direction of the light beam changes when it arrives at an interface between two different media. A fraction of light is reflected into the first medium and the rest is refracted into the second medium. At large angles of incidence at an interface between air and a solid material such as a semiconductor, nearly 100 % of the light is reflected. Interfaces which reduce this reflection exist in nature. For example, the eyes of a moth are covered with tapered nanostructures, which increase the eye sight of the moth in the dark by allowing more light to enter the eyes.

Inspired by these biostructures, researchers from AMOLF and Philips Research developed a method which drastically reduces the reflection between air and a semiconductor. This method consists of the growth of nanowires with different lengths or with the same length, but conically shaped. Using this method, a gradual change from air to semiconductor is achieved, which leads to an efficient coupling of light into the semiconductor and minimizes the reflection. These layers show a large reduction of the reflection over a broad range of colors and angles of incidence. The reduction of the reflection is of importance for different applications. A low reflection can not only increase the sensitivity of a light detector, it can also increase the efficiency of solar cells and LEDs. The results of this research are published in the prestigious journal Advanced Materials.