The FOM Valorisation Chapter Prize 2011 has been awarded to me. The jury was struck by how I creatively translated my work in the area of nanowires to a broader market. The prize will be presented on 17 January 2012 during the congress Physics@FOM Veldhoven.

I described in my valorisation chapter the possible applications of semiconducting nanowires, such as the improvement of existing solar cells and a new type of solar cell. „Diedenhofen has come up with good ‚out of the box‘ ideas and has identified applications in various areas. These applications concern broad societal problems and have the potential for general market applications,“ said the jury. 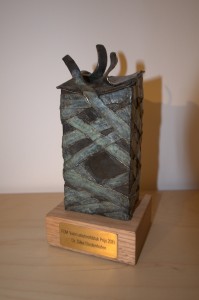 Watch the video of the award ceremony on You Tube.

I have been granted a Marie-Curie inter-european fellowship for my project plasmonically enhanced quantum dot photodetectors.