We have made special nanostructures that could be used as light-emitting diodes (LEDs).

In a collaboration with colleagues from Philips Research, Eindhoven University of Technology and Delft University of Technology, we have made special nanostructures that could be used as light-emitting diodes (LEDs). These nanostructures can be used to control the direction of the emission. Controlling the direction of the light is vitally important for increasing the efficiency of LEDs.It is also a step towards a new generation of LEDs that are based on semiconducting nanowires. The results of this research are recently published in the prestigious journal ACS Nano. The direction in which a LED emits light is mainly determined by the surface between the LED and the surrounding air. As light can only escape from the LED at small angles, the direction of emission is usually straight on (perpendicular to the surface). However this can be influenced by nanostructures in the surface of the LED. Inspired by these nanostructures, the researchers have developed a new technology with which the direction of the light can be changed.

The new method consists of growing partially-emitting nanowires in an ordered pattern. This pattern forms a ‘photonic crystal’ that sends the light in specific directions. Furthermore, the researchers have shown that the emission can be optimised by a smart positioning of the emitting part within the nanowire. This knowledge could lead to an increased efficiency of LEDs. Moreover it provides opportunities for a next generation of LEDs, based on semiconducting nanowires. 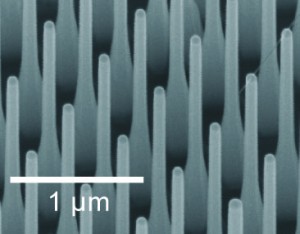 Strong Geometrical Dependence of the Absorption of Light in Arrays of Semiconductor Nanowires.

We demonstrate experimentally that arrays of base-tapered InP nanowires on top of an InP substrate form a broad band and omnidirectional absorbing medium. These characteristics are due to the specific geometry of the nanowires. Almost perfect absorption of light (higher than 97%) occurs in the system. We describe the strong optical absorption by finite-difference timedomain simulations and present the first study of the influence of the geometry of the nanowires on the enhancement of the optical absorption by arrays. Cylindrical nanowires present the highest absorption normalized to the volume fraction of the semiconductor. The absolute absorption in layers of conical nanowires is higher than that in cylindrical nanowires but requires a larger volume fraction of semiconducting material. Base-tapered nanowires, with a cylindrical top and a conical base, represent an intermediate geometry. These results set the basis for an optimized optical design of nanowire solar cells. Please find the article here.

In June 2011 I moved to ICFO-Institute of Photonic Sciences as a post-doctoral researcher. My research is focused on plasmonically enhanced quantum dot photodetectors.